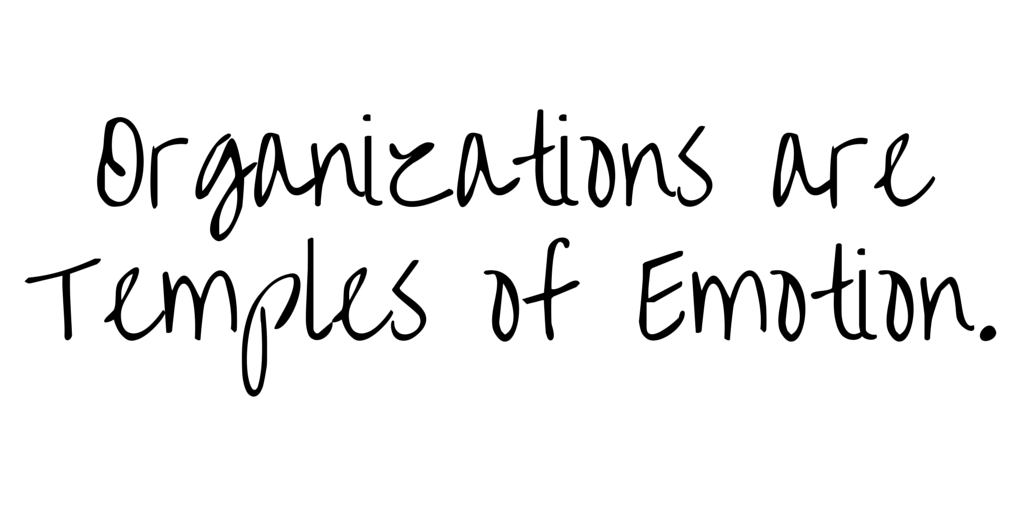 Temples of Emotion and Rationality

We like to think of organizations as temples of rationality. They gather resources to reach a certain target. Decisions are taken based on thorough analysis of the facts and evidence at hand. In those temples there is no place for emotions.
Well we could not be more wrong. Organizations are full of emotions. And very often these emotions get the upper hand over rationality, or at least both interfere.
Many companies even start through emotions. A longing to succeed, to beat the competitor, to arrive first, to impress, … And when organizations become more established, they build rational layers over the emotions. But that does not mean they’re still there.
People feel jealousy or disappointed when they do not get that promotion. People are frustrated when they are again in a time-wasting meeting. People coöperate based on personal preferences. People are proud of their achievements and of those of the organization. People are scared when something happens they cannot understand. People feel uncertain in the light of change.
It should not be like that, you might think. But it is like that. Whatever we try, emotions prevail. And when we try to control the emotional side of organizations, I think we are making thing worse. The answer to the problem of emotion is procedures, governance, hierarchy, rules, … And while these answers might solve some of the rational challenges of organizations, they do not deal with the emotional side. Organizations are temples of emotion, more than that they are temples of rationality.

If you think emotions are not that important, I invite you to think again. Ask yourself some questions;

All these questions refer to emotions.
And do you remember the last time you have started a job? How important was the hiring manager in your decision? Would you ever work for someone you despise? Probably not. And if you do, you will have to cope with your emotions. Going to work every day to work for a lousy leader will impact your emotions and engagement heavily (check out this blog on engagement).
Even decisions with high financial risk are taken based on emotions. For a complete review on that check this article. he reason for that is that rationality is bounded. People are not rational decision-makers. They do not decide on mathematics. There’s a lot of emotions at play anytime a decision is taken.
There is no point in banning emotions from the office. They are there. And it’s good they are there. Without them organisations would become human deserts where people would stop the normal natural processes.

The question is whether you should take rational decision corrected for emotions or corrected by emotions? That’s a difficult question to answer. You will never have all information before taking a decisions. You cannot know the unknown. And yet, we are asked to take decisions all the time. Some techniques might help you to avoid decision biases (we usually think these biases are negative) and to increase the quality of decisions. And yes, anecdotal decision-making usually is cumbersome (check this blog on decision-making). So these help to make the decisions.
A variation of the question if we should take emotional decision corrected by rational elements. Some endeavours started like that. Columbus has sailed out, but he did not know what the journey would be like. He studied all the maps, and integrated everything what was known in his planning. And yet, he ended up in America instead of in India.
Could it be that if we let rationality go, we might have much more serendipity and innovation? Would we have more entrepreneurship and risk-taking? I believe so.

Flying to the Moon

Flying to the moon in 1969 was an emotional event, with an emotional decision behind it. Check this review on the Apollo Program and how prestige was at its origin. Using primitive technology the NASA got people on the earth’s satellite. They were beaten by The Russians who put the first man, Yuri Gagarin, into space. There was not really a grounded reason to go there in the first place besides overcoming a challenge and beating the USSR. Neither of these are rational reasons. But still, the decision led to a lot of other developments, and you could not underestimate the consequences of the race into space between the Russians and Americans.
Today, interest for manned space flight has waned. Space agencies resort to cheaper unmanned flights to gather information of space. They send smaller devices to planets and comets. And then there’s Mars. There are plans of sending people to Mars. It’s a long and dangerous journey. And the journey is one-way. 200,000 people volunteered. The fact that so many people show interest for a suicidal mission, is revealing. People are emotional beings. And emotions override reason, if not every time, still most of the time.

So it’s an illusion to build organizations solely based on rational design principles. Organizational designers and decision-makers must take into consideration that emotions are omnipresent. And the challenge is not to smother them, but to make use of them. Because they give people the sense that they are human. Also at work. So by acknowledging emotions at work, people are treated as people. And not as some rational derivative or reduction of humanity.