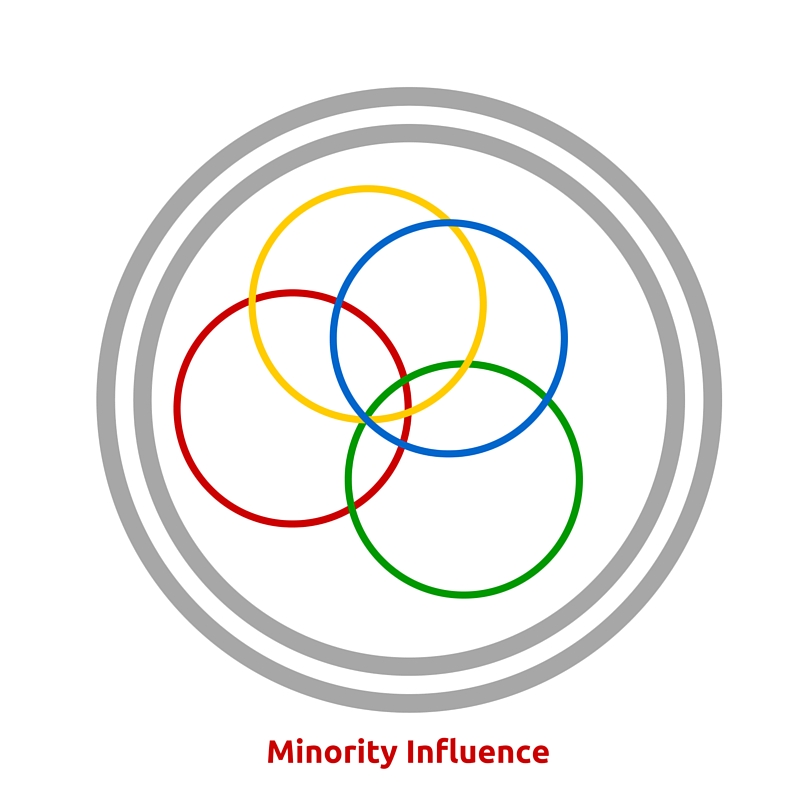 Another terrorist attack. This time it’s Brussels. Before we had Paris, Ankara, Istanbul, Bamako, San Bernardino, … It’s a long list of sad events of senseless violence. Why have people become so radical? And how do people get so far that they are willing to blow themselves up? In the name of whose God do they do that?
We cannot understand this. I cannot understand this. It’s so unnatural to do so. It seems so purposeless. And yet, there seems to be no shortage for suicide bombers. It’s a minority that terrorizes the majority who just want to get on with their lives.

There are two processes: compliance and conversion. Compliance is the public acceptance of social norms. But privately these norms are rejected. Conversion is the influence of the minority to change the majority.
Here’s a check-list on how a minority can influence the majority:

I was wondering if the terrorists are acting like a minority group exerting minority influence?
My conclusion is that they are not. The terrorist could be a minority but their influence is not positive. The biggest issue is that they are not flexible, very biased and not easily identified with by many. But they are consistent, confident, seem to resist pressure and have the ability to put their topics on the agenda.

The way terrorists act is that they are not aiming for influence itself, they are aiming for effect. That is not the same. I do not believe that terrorist want to change the society they are part of. They want to change political action: decrease the popular support for military action abroad (we can argue about the chain of events that led to this situation), create a culture of fear that weakens democratic values (when will we have patriot Acts and Privacy infringement laws?) and revenge for all the injustice.
We’re in a mess. And there’s no light at the end of the tunnel. But these terrorists are not a minority we should listen to. The influence they are seeking is not integration but separation, is not progress but destabilization, is not construction but destruction. And their means are not resistance and debate, but violence and fear.
Let’s not allow any influence to that group who claims to be representative of a minority. Let’s listen to the true minority. Leadership, Education and Employment are the key to integration of minorities. If they do so, they are entitled to influence.
Minorities in Companies
We like to think of companies as monolithic constructions. In such a view there are no minorities. But usually there are. In any given company there is a dominant coalition. And people who do not agree with the views of the dominant coalition tend to be seen as dissident voices. In another blog I have written about the value of dissidence. Dominant coalitions want to exert thought control.
I tend  to think of a company as aggregation minorities. It’s like an ecosystem. Some groups are minority because of their number, others because of their influence. But the challenge of a leader is to offer minorities a respectful place and allow them to give according to their capabilities to the success of the organization.
In this sense minority influence is a good thing and should even be fostered. Because if done well, minorities can steer the company in directions the dominant coalition does not think of. Minorities can save companies by adding new ideas. This is diversity. Finally minorities make people think.
Radicalization
If you do not allow minorities to develop, express ideas, or if you oppress them, they will radicalize. They become fanatic, inflexible, rigid, alienated. This happens as much in companies as it does in society. So why so people radicalize? Because they have no perspective, no voice, no future. We need to give minorities a future so that they have a benefit to integrate and not alienate. Minority influence is a great thing.
Maybe you think I took a big detour to get from the Brussels Attacks to the Minority Influence topic. Please accept that this is a blog site that propels ideas into the blogosphere; Every idea may cause feelings of approval, recognition, dismay. Feel free to disagree, to elaborate, to deviate from these ideas. Dialogue is what will allow us to keep our humanity and respect for others. Let’s try to understand minorities before we want to be understood by them. We could all be a member of a minority one day.
Giving minorities influence is in addition to building community resilience as answer to disaster. But community resilience is the way to cope with attacks as they occur, minority influence is the way to avoid attacks to occur.